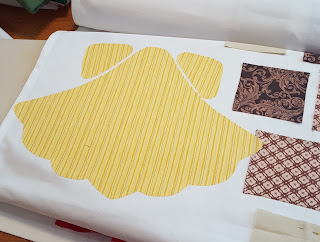 Last year, our parish priest requested that I make a three-banner set for the church, representing 3 saints that are important to that church. Based on when he asked me and how soon he wanted them ready for display, I agreed to try to have them finished by the saint’s day for each one as it came up.

**Note. Since this was done for a church, the descriptions and explanations below will make use of more “churchy” and Bible-related language. However, I’m presenting it here primarily for the artistic and fiber arts side of things.

The first saint’s day that was going to approach was that of St. James. Based on research using various saint descriptions and databases, I came up with a list of symbols for each saint, and started working it into a design.

Additionally, it was important that all three banners be distinct and individual, but yet that they have some cohesion and are clearly of a set. I came up with the mosaic-esque element first, and decided to try to have a similar element in each, to keep them unified. I’ll write more about my inspirations for the set as a whole when I post about the completed set of 3.

Here are some of my sketches:

Once I had the design ready, I got the fabrics. I got all of the base/background for the banners at once, since it would be the same for all of them. I measured the hall they would be going into, with the help of the priest, to figure out what kind of space coverage he wanted. They ended up about 3′ x 5′, though the wall could have handled more. The restrictions that kept them small were 1) it had to be able to fit on banner poles for procession, and 2) the person carrying it needed to be able to see under or around it if necessary.

Here’s my write-up of the symbolism used, which was posted beside the banner in the church:

The Path
St. James, after being a disciple of Jesus, became a traveling preacher in his own right, and is said to have traveled as far as Spain. The path represents his travels and his teachings of Jesus as The Way.

The Shield
St. James Parish in [removed] uses a red shield with a sword and shell as their church crest.

The Sword
St. James is said to have been beheaded by a king who did not appreciate his teachings.

The Shell
One of the places in Spain that St. James may have traveled to, and where his relics did come to rest, was named after him: Santiago de Compostela. This is not far from a coastal area, and pilgrims who visited his relics in the middle ages would pick up a sea shell as a souvenir. Some attribute the shell to pilgrims’ souvenirs from the area of Palestine, instead.