There have been a few more reenactments this summer I’d like to catch up on! However, I didn’t get a lot of photos at each one, so I’m posting about several reenactments at once, this time.

There was a reenactment at Zoar village in September this year. This reenactment happens every other year, although in the future it may not: From what I’ve heard, the levy will no longer be maintained by the Army Corps of Engineers, so the historical village may be/get flooded in the future.
I did take pictures, but not with my own camera, so I don’t have any pictures to share. However, a picture of me did appear online, in the red memorial day dress you might remember from a few posts back!
LINK: Times Reporter (New Philadelphia paper) – Picture of me!

Fremont is the town in which President Rutherford B. Hayes lived. He was born in 1822 and lived into the 1890s. He was president in 1877. His home and grounds are called Spiegel Grove, and still have connection with his descendants.
The event was the first weekend in October.
This would have actually been a very nice event (it was last year, even though I only day tripped it, so I was really looking forward to this year!) – except that we got LINK: rained out!
They actually cancelled the event late afternoon Saturday. So the dance, Saturday night, and all of Sunday were cancelled.
What amuses me is that they were surprised… This is a direct quote from their website:
“Spiegel Grove is the name given to the estate of 19th U.S. President Rutherford B. Hayes. It was so named for the large puddles of rainwater that collect beneath the towering trees following a storm. “Spiegel” is the German word for mirror – an accurate description for these nature-made reflecting pools.”
Well, they put the union camp right in those pools!

Here are the pictures I got from our very damp Saturday noon battle: 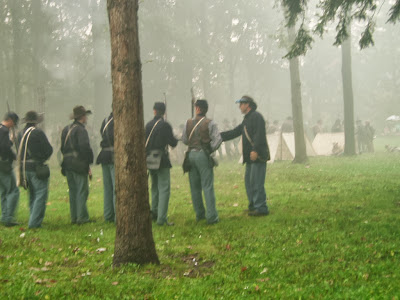 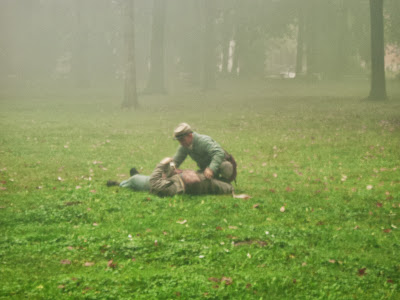 The most recent event we went to was the LINK: Moreland Community Historical Society Heritage Day.
This is south of Wooster, Ohio, and is a smallish event. There were a few Civil War camps as part of the event, and many of the spectators were local Amish. Very pleasant! Unfortunately, again, I got no pictures from this one. I did help bake a pie, though!