The second banner I worked on for church represents St. Rocco. Unlike the St. James, who I already posted about, and St. Andrew (yet to come), Rocco was alive in the 1300s, and this means that part of my research could be in medieval manuscripts! Fun!

In fact, this picture from a book cover is actually my direct inspiration for the dog on the banner. There is a dog because that’s part of Rocco’s story (see below for explanations of the symbols I used). The dog is a whippet style, because whippets and greyhounds were popular in the middle ages. Also, because they are super cute the way they were drawn back then!

My first step was to use iron-on double-sided interfacing, as I’d used on the prior banner. I ironed it all over the back of the silver fabric, but left the paper on, sketched my dog in reverse, then cut it out; laying it on the banner gave me a sense if I was where I needed to be. I proceeded to do this with all the other shapes needed for this design.

In the initial layout, you can see that all the edges are still curling up. At this point they all have the double-sided iron-on interfacing, but still with the paper backing. This was my test for placement, then I pinned it all down roughly, just to keep things in their respective places, so I could move to the ironing board.

As I ironed, I was able to fine tune placement, especially when I had to remove and replace upper layers so I could get the bottom layers right, or when I was interweaving layers, like with the roots and branches. You may have noticed that my sketch and my banner do not have the same aspect ratio. Yep, that actually caused some consternation, since it meant I had to readjust placements and proportions once I was working with fabric! I don’t know why I didn’t prepare my sketch pad to reflect the right dimensions… 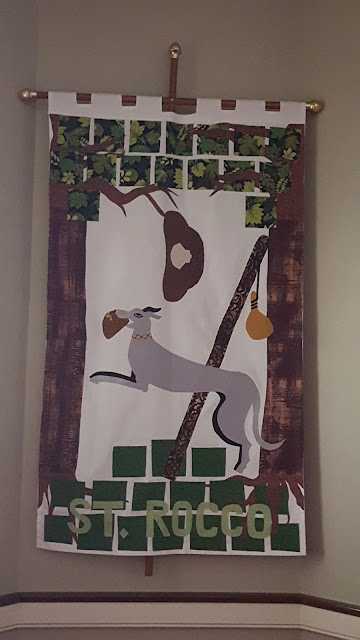 The Symbols of St. Rocco
As represented on our new banner, 2017

The Forest
St. Rocco lived in the middle ages, and cared for people with the plague. When he also caught it, he went and lived in the forest alone. He is often shown pointing to an open plague wound or bubo on his leg.

The Dog with Bread
While St. Rocco was living in the forest, a dog stole bread from its master and brought it to St. Rocco to keep him alive until he recovered. Some stories say that the master followed the dog, and took St. Rocco to his home to recover. Others say the master simply became a follower of St. Rocco once he recovered.

The Hat with Shell
At one point in his life, St. Rocco made a pilgrimage, likely to Rome. By this point, the shell was the symbol of Christian pilgrims of all types, regardless of where they went, though still most often associated with St. James at Santiago in Spain.

The Staff with Water Bottle
The staff is another symbol of pilgrimage, given that pilgrimages at that time were done on foot.