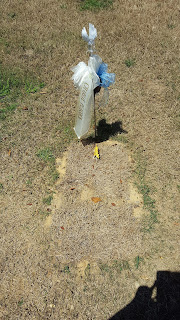 As I write this it, has been maybe all of a few hours since I finished a novel – which was good, and enjoyable, overall. Interestingly, of the 5 books I’ve read by this author, so far 4 of them have had characters who had experienced infant loss prior to the story, or during (and the 5th book had characters in it that had experienced it in one of the other books!). That’s not what I’m going to talk about right now, though. Right now I want to talk about how this novel, with a completely innocuous scene, stirred in me some sadness and regrets, and why my eyes are now burning from having cried.

The scene in question was a simple burial, where the daughter got to put the first handful of dirt down into the grave on the coffin. It wasn’t even described in much detail, since the main character was (rightly) in a grief-haze.

It got me remembering Charlie’s funeral, though.

Intense grief is truly the worst time to have to plan anything. I found myself unable to think straight, even when I thought I was doing well, and keeping the details in line. Planning Charlie’s funeral felt so similar to planning our wedding not even 2 years prior: people to notify, details to plan, so many decisions… and no time to ponder, revise, or even just get used to the idea. And the whole time, crying.

Do you know if an open casket funeral is an option with a baby? I have no idea, and it did not occur to me to ask, at the time.* He had a baby-casket that reminded me of a sewing machine case: a base, with a large lid that comes down over top and clips shut. It was simple, and, more importantly, more affordable, but looking back, I wonder if it would have been nice to have other options. The funeral director was lovely, and helped us through many of the details, even waiving some fees when possible. And from what I’ve heard, that is something that many infant loss parents have also experienced. We also picked out a flower arrangement, which sat below the coffin during the church part of the funeral, and atop the casket at the graveside part of the service. (It also had a ribbon with his name, which lasted longer than the flowers, and which I tied to a garden decoration – as you can see in the picture above – which allowed his name to be there, long before his headstone could be. The ribbon was just barely legible, in tatters, when I removed it – just about when the stone was placed.)

In hindsight, I also wonder if we should have let more people come to the graveside. We kept it just family, and brief, also so that the logistics of getting back to the church for the bereavement luncheon would work better.

In fact, the graveside part is really what spurred most of this thought, most of these memories and questions. The scene in the book had dirt. Charlie’s grave didn’t.

Or rather, I’m sure it did, somewhere, under the plastic grass that covered everything. I never saw real soil, and I never saw charlie’s coffin set into the earth. I trust that he was placed there, and I saw the filled hole later when we visited his grave, but once I handed over Charlie in the hospital, to the weeping nurse with turquoise eyes who took him down to the morgue, the rest of his journey is all something I have had to trust people about. I never saw evidence of it with my own eyes. I don’t know with my eyes that he was kept in his tiger pjs, I never saw that he was in the coffin, and I never saw that he was put into the ground. I trust that it is true, but it is not tangible to me. I even garden there, and I feel the soil on my hands now but I did not then.

I wish we had had some dirt.

There are so many decisions when putting together a funeral. Music, coffin, flowers, who to notify and how, church vs. graveside, getting a pastor… There are so many things, and so many you don’t even know to ask, and the whole time I was blinded by tears. I had no way to know that now I would want dirt on my hands.

That’s what hurts, today. The regret that I didn’t know, that I wish I could have had some aspects be more tangible, the regret that I left him at the cemetery, on a stand, in a box, with no mama or papa to be sure he would safely be placed where he belonged. Even if that isn’t where we wanted him to be.

I’m crying again just writing this. I miss Charlie so much. As my husband often says, we do what we can with what we have that day: on the days we planned his funeral, we did our very best to make sure it was as perfect as we could. There was no way back then to anticipate the “I wish” and the “what if” of now.

Yours, with Charlie in my heart,

* By the way, it’s probably clear that we chose to have Charlie buried, not cremated. Burying means that the body is embalmed, which means that the body is chemically preserved. I think there are options not to do this in some states, but embalming is the usual way it’s handled. Cremation is when the body is completely reduced to just ashes. I have a personal pet peeve with the portmanteau word “cre-mains”. Because: they are human remains either way! If we are going to get specific, then buried bodies better start being referred to as “emb-mains” from here on out. Or stop making up silly words and just say the name of the deceased instead, or just the word “remains”.