This banner was fun but oh, so much harder to put onto fabric what I had in my head!!! As you can see in the sketch above, St. Andrew (a fisherman) is being represented in a nautical way, with a large fish in the center.

To begin with, I started with the fish. The squares, while a multitude, are geometrically simple, so those came second. The net… ah, the net. We’ll get to that.

To make the fish, I used the same technique as with the dog: iron-on the interfacing, draw the fish on the paper in reverse, then cut it out.

Still hadn’t figured out the net, and can’t place the fish till the net was done, so I set that aside, and worked on the squares and the name. The squares needed to not have too many of the same print near each other, and I wanted the slight fade-out effect from using different sizes.

At this point I hit a mental roadblock. Initially, I had thought of creating some sort of string net in dark grey, and couching it to the banner. But the amount of handwork was daunting (not in and of itself an issue), and I hadn’t figured out how to not have the ropes show through the fish and give it a weird texture.

I looked at various types of netting, lace, and other hole-y fabrics, in hopes I could find something flatter that would give me the look I wanted. I found nothing that worked. The project came to a standstill. Luckily, I still had some time.

I kept browsing for options and frequently went to fabric stores to try to figure out a way past the incongruities between my vision and what I could put my hands on.

Finally. I realized that maybe I could find a fabric that just looked right. It had to be dark lines on a light background, though, and most prints with ropes are dark blue with white or tan ropes, so this would take some hunting. Eventually, though, I found what I wanted!!!

So now I have a net! Still a bit of shaping to be done, but it means I can go back to the fish for a bit.
The fish originally was going to have individual scales, each of a different color. I swapped that plan in favor of a sheer teal tulle, which was much more synthetic than I’m used to working with. Had to turn my iron cooler! And… this part I paid for… it had a glitter pattern shaped like fish or mermaid scales. I reversed the fabric, so the glitter side faced the silver fish, but once it was ironed down, you could still see the scales (without the banner shedding glitter).

… I got a little over zealous cleaning up the glitter (which I am not a fan of!) and accidentally touched my hot iron… had blisters for a week… oops!

After a bit of playing with it, I managed to shape a net, and started working on positioning: 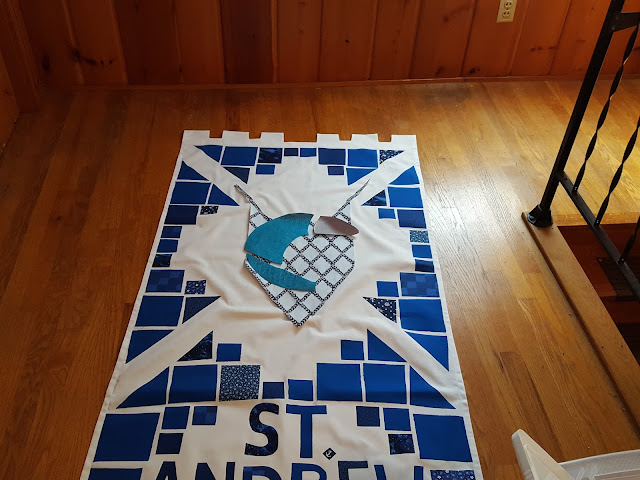 The Saltire
You may be familiar with the flag of Scotland, which is blue with a white X (also called a saltire). This is the Cross of St. Andrew, which originates from the shape of a sideways crucifix or similar cross, which is how St. Andrew was killed.

The Net
St. Andrew was a fisherman, and one of Jesus’ disciples.

The Fish
Again, St. Andrew was a fisherman, and he “fished for men” according to the story.

Other names for Saint Andrew include: None! He was only St. Andrew!