(Topic: What I would be doing with Charlie) 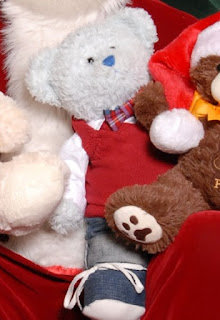 This post is a bit late! Oops! I thought I’d posted this picture, but realized that I hadn’t, and thus, hadn’t shared the story.

This last Christmas I did something I don’t ever remember doing before. I went to a mall Santa.

I’ve never ever really been comfortable around people who are dressed up. Wait! Before you start calling me a hypocrite since I reenact and hang around “dressed up” people all the time, let me explain. Santa and many other characters end up disguised rather than just costumed. For instance, I don’t get nervous around actors wearing clothes specifically for a role. But as soon as the person inside is hard to distinguish, such as with false hair (like beards), strong make up (like mimes or clowns), or masks or mascot heads, then I have a tendency to run the other way and not look back. This is a long-standing fear of mine. Usually I’m pretty good at being aware of mascots and such, and just avoiding them, but on occasion I have still ended up having a panic attack.

This year, though, a friend (a fellow loss-mama) suggested that another friend and I accompany her to a mall Santa, for our bears to have a Santa visit. Surely, she thought, the Santa could hold all three bears in one sitting, which would allow us to split the fee three ways, and each have a lovely memento.

A huge reason to do this, was because this kind of experience is what other mommys get to have with their children. We, as loss-mamas, miss out on a lot of experiences that we would have had with our children, and our grief is not just missing the child we knew, but also mourning the loss of their future, and our future with them. So doing things in their memory, that we might have done with them, becomes meaningful and in someways cathartic. To be fair, this is my own experience, and others may perceive it differently…

So despite what I told you about my own fear of “dressed-up” people, I was willing to give this a shot. For Pookie. For Charlie.

When we all gathered at the mall, and then approached the Santa together, I let the other two mamas lead. However, my biggest fear was allayed when we approached the Santa area and I saw that our Santa was equipped most mercifully with his own beard, and thus, his full face was visible! I was immediately put at ease. He also seamed pretty calm and kind to some of the kids ahead of us, which was reassuring too.

In fact, he was amused by the three Molly Bears we placed on his lap, not realizing at first what they were. He looked wonderfully jolly, don’t you think? 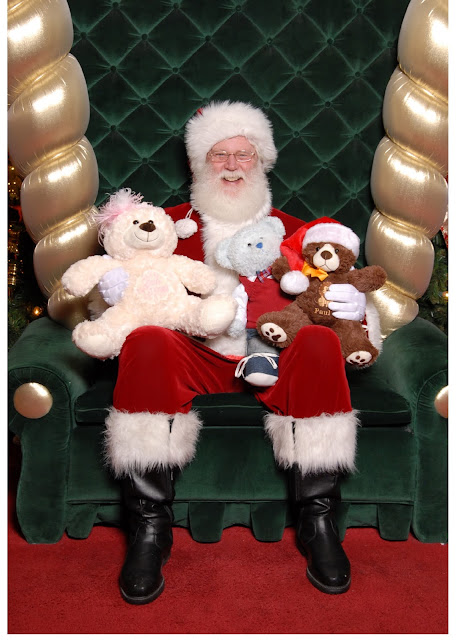 After the picture was taken, we explained to the photography and kid-wrangling crew, as well as the Santa, and all expressed their condolences. That was nice of them, but for me, the nicest part was seeing Pookie, tucked into Santa’s lap next to Viviana Bear and peeking around Paul Bear to see the camera. It’s delightfully candid, as I’m sure any picture of Viviana, Paul, and Charlie would have been.