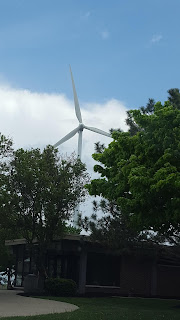 I recently had the fortune to go on a road trip with hubby, one of my sisters, and her dog. We made a few stops in either direction – the final destination being a family event. Here are a few of the neat things we discovered in either direction:

Much of our path lay through a wind farm. On the way out we stayed on bigger roads, and on the way back we went on tiny roads and could see things better. A wind farm does not mean that all the land is owned by the wind company – in fact, most of the land isn’t. The wind company owns maybe a headquarters or a staging area to keep their equipment, but all the turbines are on leased land, often in the middle of agricultural lands. In northwest Ohio that’s mostly plant-based agriculture, though wind and animal farming is supposedly a better fit, since plowing around a turbine pad is a pain, but cows don’t care if they are grazing around one!
Turbines are bigger and louder than you may think, and not everyone likes living near the big ones. However, smaller ones are quieter, and then there are also other styles to consider if you are thinking about adding wind energy to your home.

Unfortunately I was having leg and foot issues for this whole trip, so the camping and hiking didn’t go so well, but I still enjoyed being along the lake, and seeing some concept homes from an expo – the Chicago World’s Fair. These concept houses are currently being privately restored, and maybe lived in? but they have great explanatory signs.

On the way back, we also passed through Fort Wayne, Indiana. We tend to enjoy historical sites and museums, so we were looking for something like that to stop at, but not for too long because we were outrunning a massive storm cloud at that point!

We discovered, perhaps unsurprisingly, that Fort Wayne was founded around a fort – called Wayne! The original forts – like many – was destroyed and rebuilt a few times, and then ultimately not kept as a fort, and as with many, did not survive. However, (again, not uncommon), it has been reconstructed according to old records, so the reproduction fort is available to visitors.

In the case of Fort Wayne, the fort is in a public park across from a water treatment plant built in the 1930s, which had a fascinating edifice, too. There was a little info area about water treatment and clean water, where we got this cute photo op!

The fort, though, is an unmanned site, unless an event is taking place. This means it was all shuttered, but the gates were open, so we could enter the fort’s courtyard but not enter the buildings. Even the reconstruction was abandoned for a while, but now there is a non-profit dedicated to the restoration and preservation of this cool site.

In all, it was a fun trip, and I love having Pookie photo ops to help show neat places!