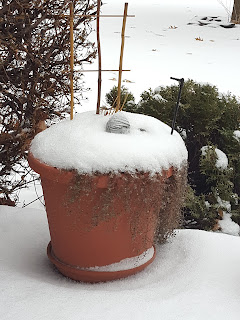 The First 6 Months After Loss

There’s a funny thing I’ve noticed. We are now at just over 1-1/2 years since Charlie died, and our lives go on being lives, even while we miss him. We travel, we work, we keep house, we even moved. But I have noticed something: for me, the time since he died is very much divided into chunks. The first 6 months, when things were very hard; the second set of 6 months, where I was figuring things out; and then the most recent six months, where I am still dealing with things, but some semblance of normalcy has come back. Today I’ll focus on the first 6 months, with the accompanying gaps in my memory.

In the first six months, it felt like life was a bit of a whirlwind. “Everything” was happening: Charlie died, we planned his funeral, we held his funeral, we wrote thank you cards for the flowers and gifts, we planned his headstone, Hubby started a new job, we moved… It just seemed like a lot changed. But it wasn’t just the physical aspects that changed, nor just the tasks that we added to our plate. There were also things taken away, that we had to adjust to, like the roles we had been planning to fill.

Looking back at those six months, there seems to be a fog over the whole thing. I remember certain pieces vividly, but others are a blur. I can’t remember most of who came to the funeral (though I am thankful for each and every person who did), and it took me a long time to remember what we did for Christmas: which side of the family we were with, which church we went to, which traditions we did. And for much of the in-between times, I would have to really dig to see if I can remember what was going on.

It’s not that I have an amnesia. It’s just that my brain and my emotion/heart were dealing with something more important than everyday life. Figuring out grief, where it was inside me, what it meant to me, how I was going to incorporate it into my self: these were much more important issues than making memories of details like what was going on in our day-to-day lives. We thought we were managing well, getting things organized and achieved, but in reality we were going day by day and moment by moment much more than we had the brainpower to realize.

Figuring out who we were, within these new circumstances, also took a lot of mental and emotional energy. Were we parents? The answer was yes, but how were we parents? What was our job, now? One of the things I struggled with was housework – and eventually (after the first 6 months) I realized that part of the reason I had trouble getting it done, was that I’d been picturing having my child in a carrier or eventually helping me out, as I did chores. In fact, I feel more like doing housework when I babysit than when I actually have time to clean.

In those first months, after we had a place for Charlie, and after we’d moved and established things like how we’d visit his grave, and after I’d gotten the house into some form of a livable space, I seem to remember going through a tougher time – like the busyness had worn off as a distraction, and moving and unpacking was no longer a distraction, and then I HAD to deal with our new circumstances, and with missing Charlie, and also missing what he would have been. And Hubby also had some moments when his job had him in contact with newborns, where he also really struggled. We leaned on each other a lot, early on.

For those of you going through something like this right now: In my experience, I found ways to incorporate our loss into living, and while at first the grief was such a heavy burden, in time, I don’t know if it got lighter, or I got stronger, or I just found a better way to carry it: but I find the grief doesn’t overwhelm me nearly as often or nearly as much. I still love Charlie just as much, and miss him just as much, but I grieve him differently, and have found my own ways to honor and remember him, while finding ways to live and move to new ventures and new identities as well.

Love to all of you reading this. I hope that blessings find you, silver linings catch your eye, and you find things to live for even in the darkness.