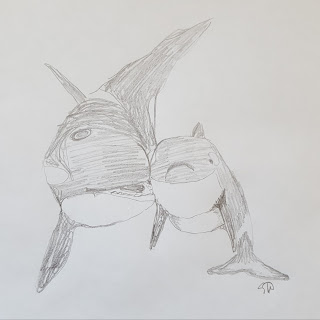 I don’t know if you have seen it, but there are many articles right now about a mother orca (killer whale) whose baby died. The orca is making the news because of how she is grieving, and it’s pretty amazing.

In a nutshell, the calf was born, and was seen swimming with mama, but the next time the orca mama was seen (about half an hour later), she was carrying the deceased baby. She has been carrying the baby ever since, and it’s been 10 or 11 days.

Here are a few articles about what’s been happening:

MSN’s article from Aug. 2
Fox 5 San Diego (with video and audio I have not viewed)
National Geographic Aug. 2
NY Times “The Orca, Her Dead Calf, and Us) Aug 4

This story is being reposted all over loss-related Facebook groups, sometimes with commentary, sometimes without. I find it fascinating how people have such different takes on the situation. I’ve seen several articles that focus on the issues with the habitat and food sources, but then a lot of the commentary I’ve been seeing draws parallels to human infant loss, and the human grieving process.

And I think that this phenomenon is fascinating: it allows non-grieving people to interact with the grieving process at a “safe” distance: we can admire and understand an animal going through this, even while we are astonished that they can grieve, without being uncomfortably confronted with human mortality. I think we’re more used to the idea of animals dying.

In the National Geographic article, this came up: “As J35’s sojourn continues, some experts question why she’s still so attached to the calf. Could it be because the calf lived for about 30 minutes after it was born? Atkinson thinks the grief Tahlequah is feeling is deeper because after 17 months of gestation, she then had the chance to form an emotional connection with her baby before it died.”

Does he mean, she only formed the bond in that half hour? Or did he mean, she formed the bond in those 17 months? To me, this is a no-brainer – but then, I’m projecting my own experience onto the orca. For me, it was during gestation. I knew that Charlie liked solo violin music, and handbells. He was a baby in motion, and very active. I know things about him because of the time when he and I were symbiotic, when I was pregnant with him and in some ways, he was truly a part of me.

We know cetaceans are very intelligent, and it does not seem far reaching for me at all, that an orca mama could get to know her baby during pregnancy, then mourn her baby, and not want to let the baby go.

If this is a safe way for you to talk about loss with people you know, I encourage you to use this news story as a stepping off point to talk about your own grief. I think there truly is a parallel here that might help make our grief easier to explain: our lack of “letting go” because we want to keep the love, our insistence on mothering our children no longer here, and carrying them with us always in a thousand metaphorical ways.