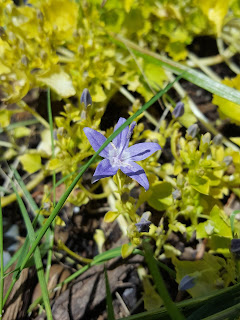 Today I want to talk about how I see my Charlie act in the world. I have noticed, over the weeks and months of connecting to other loss-mamas and loss-papas, that an element of grief seems to be a higher tendency to “magical thinking”. Bear with me while I explain!

To have “magical” thinking is to see coincidences or normal phenomena, and to attribute meaning or volition to them. For instance, if I see a cloud that is in the sky, which the wind has been blowing about, I may think that it resembles a heart, and it may remind me of my son. Magical thinking would say that the heart-shape is definitely there, and that it was formed by Charlie or by God.

I’m not saying that this is necessarily a bad thing at all. I would like to take a little bit of time to explain how I see things, though, which has some magical thinking, and some slightly different views. I try to be aware of the ways I think, and to be critical (not mean, just thinking hard), but also to fully feel the experiences.

All of these are sweet and lovely sentiments. They are not my personal views on what is happening. I prefer to think of these happenings, not as sent by Charlie, but simply as an occurrence in the world which reminds me of Charlie and helps me think on him fondly. Which I treasure. 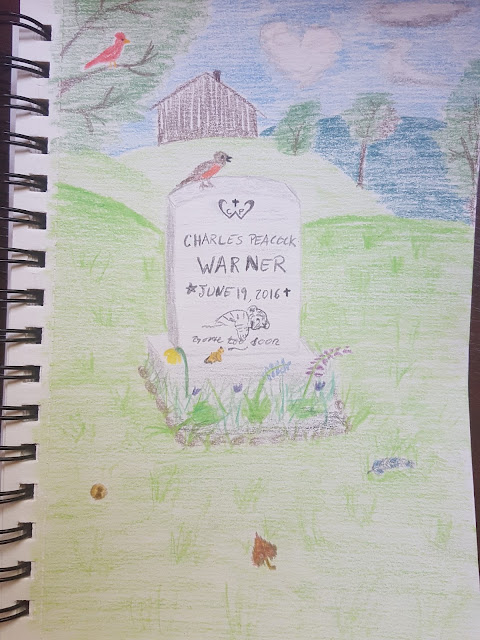 Where I see Charlie’s “presence” much more is when his life affected others, and I get to see the result. I have one friend who treasures her daughter that much more, because she knows that loss could have happened, and she is lucky to have her daughter. I have another friend who told me she was able to mourn her miscarriage at Charlie’s funeral. THAT is my Charlie – and I don’t mean him literally acting now, but that his existence has a ripple effect – that is my Charlie’s love acting in the world. And I am Christian. So to couch it in religious terms, I believe the holy spirit helps them, by means of Charlie having lived.

I do have moments of more magical and less “rational” thinking, though. For instance, the above instance of religion, which can be a form of attributing actions to a non-scientifically proven force. Also, you’ve heard me mention Pookie, our lovely weighted Molly Bear. He (yes, “he”) is a companion to me. Literally, he is a stuffed animal toy, with sandbags inside. However, I attach emotional significance to the physical comfort he brings, and I personify and anthropomorphize the toy because it gives me comfort. I don’t literally believe that my son’s soul is in the bear, or that the bear has his own literal soul. I don’t believe that the bear actually has likes and dislikes, or needs his clothes changed. BUT, I use “imaginative play” (usually something most people do less of as they age out of childhood) to give the toy a character that gives me comfort, and allows me to take actions – such as caring for it – that give me comfort. It is, of a sort, a willing suspension of disbelief, and a form of play or play-acting. Like children play house, but in my case, to soothe my battered heart. 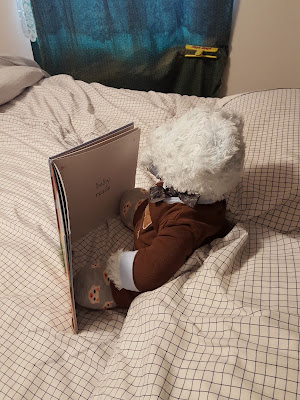 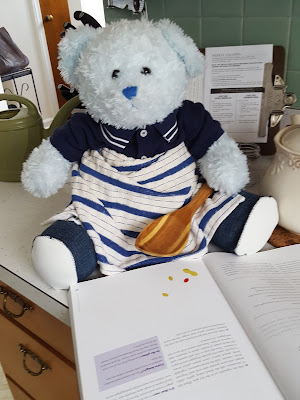 Another area in which people often use a slightly magical approach is when talking to the deceased. We know that the person who died cannot literally hear us with their ears. However, based on one’s belief system, some people believe that the deceased person can hear them, or is aware of what is being said. I do this. I know Charlie is not physically present in a way in which he can hear me. But, as I referenced above, I do ascribe to the ELCA Lutheran/Episcopalian view that there is an afterlife with God. I don’t know what form it takes, exactly. But I direct my thoughts and words to my son, sometimes. And here is the part that puzzles me: if his spirit or soul or essence is not tied to the earth, why do I feel like his grave is where I can talk to him best? I think it’s because it’s something physical. As a physical being myself, it is easier to direct my thoughts at something rather than just out into the æther. So I usually talk to Charlie via his grave, or Pookie, or our newly set-up portable garden on our front steps. Now, we know that his body is physically at the cemetery, so it will always be most special. It is interesting that a form of sympathetic magic applies here – we added a bit of soil from the cemetery to the pot here. Does that bring his body here? No. Bring him closer? No. Make us feel like he is closer and we can care for him better? YES. 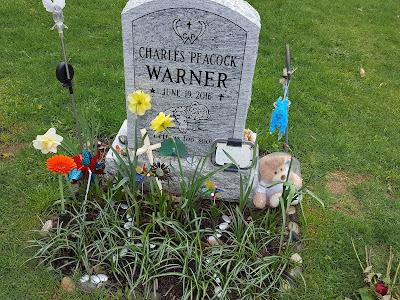 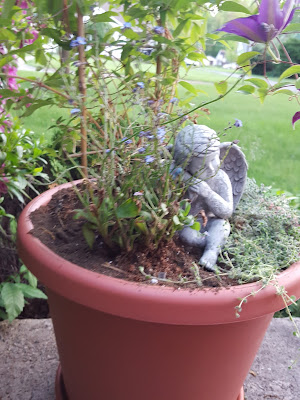 Remember, a loss-mama and loss-papa have different jobs than a diaper-changing-mama and diaper-changing-papa. One of their jobs is to keep the memory of their child. How they choose to “keep” that memory is their own choice, but they have no physical tasks in this world to care for the actual child. So there are other types of care they might substitute. In our case, this includes caring for Pookie, gardening at the grave, and gardening in the planter. It also includes me maintaining the resource spreadsheet. The other job that loss-mamas and loss-papas have is to care for their hearts. And hearts (souls) are a deeply personal thing, so this part varies a lot. Some of the physical tasks I described also care for our hearts. Each growing plant soothes my heart just a little bit more. We also do things like meditation, journaling, pacing ourselves, knitting, drawing, religious worship… We personally also find it very important to spend time with each other, in various ways. This may mean cuddling, talking, playing games or watching movies, or even just cooking or doing laundry. Each person grieving will go through this differently.

People often forget to include loss-papas. Their hearts are broken just as much, even if they show it differently. But there are other people with very ouchy hearts too. People like the grandmas and grandpas and aunts and uncles. Siblings if there are any, and cousins, too, all depending on the shape of the family involved. Each of them is finding their own way to mourn, their own way to care for the baby, and their own way to patch up their hearts. 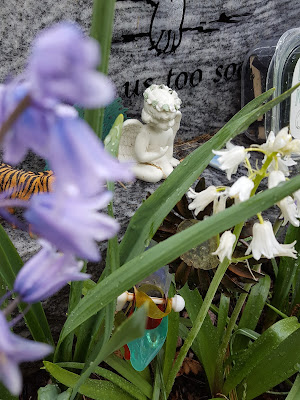 Lots of love to everyone reading this, and all the people in this world whose hearts need a soft touch.
Love gently, my friends. See the magic where you want to see it, and don’t be afraid to let your imagination help you heal.

With peace and love,
in Charlie’s memory,
~ Sarah