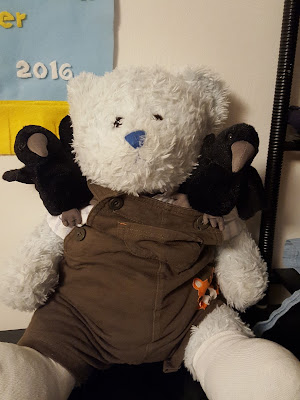 This year I was really excited for Halloween. I felt like it was the first year I could really “do” the holiday, and hand out candy (I don’t remember why last year didn’t work). So I’d bought some webs to put up on my front bushes, and some candy to hand out. I was really excited when the conference I was going to allowed me to be home in time to participate! But I came down with a bug that kept me in bed for quite a few days, so I missed out completely 😟
I was even going to get Pookie dressed up. He’d gotten two ravens at a raptor rehab center gift shop, and he was going to be Odin (from Norse mythology) who has two ravens (Huginn and Muninn), and an 8-legged horse.

Why was I so excited? Why was I interested in participating, in something that many people consider normal? And a friend of mine recently asked for my perspective on Halloween, too, especially as regards costuming. So I’ll try to give you a little background before I talk about my own position, so you can understand where I am coming from.

I grew up in a family where we didn’t really do Halloween at all. There were a number of reasons for this, if I understand right (though you’d have to ask my parents to be sure!). First of all, it is an “eve” celebration of a Christian holiday (All Saints Day). So as I understood it, the idea was to keep the emphasis on the holiday, and not on the festivities the night before, which are much more non-Christian (i.e., traditionally called “pagan”). Another reason (and I slightly agree with this one), is that it is a begging holiday, and also has an aspect of threat built in, even if not usually acted on anymore: “trick OR treat”. And I don’t know if this is a reason my parents used, but I find it at least noteworthy: The original idea of dressing up on the eve of All Saints was to frighten bad spirits away, so the costumes would be pretty ghastly and horrible.

Taking all that in mind, you can understand that, as a child, I did not go trick-or-treating, and in order to make sure no-one would mistake our house for one that would give out candy, we made sure our porch light was off, the curtains were closed, and we were not to “be around” in such a way that someone might think they could come to our door. This usually meant that we could look out upstairs windows, but not downstairs ones. Keep in mind, this is how I remember it, so there may be some aspects that weren’t quite as I think they were!

An additional reason that Halloween often meant staying in is that I grew up in a college town, which usually has a fair amount of drunken costumed carousing downtown and around the frat and student housing areas of town. While it’s reasonably safe, at least as an adult, to be downtown early in the evening, it becomes much more crazy as the night goes on, and I was kept away from the craziness when I was young. When I was in college, I did go downtown a few times, but never saw the point in staying late. In fact, I once had to explain to a friend that the 6 or 7 people dressed in “matching costumes” were, in fact, actual riot cops!

When I was in my late 20s, I dated a guy with 2 young children, and taking them trick-or-treating was an amazing experience. I did dress up (why not??? And I’d met the guy at a Civil War reenactment). It was amazing, though, not so much because following kids around is fun, but because it was eye-opening into this aspect of American culture I had not heretofore experienced. There was a neighborhood camaraderie that I had not seen any other time of the year.

I repeated the experience a few years later with a different man, one I’d fallen in love with and married! We went out with his Godson and the Godson’s parents and cousins. And in this case, I got to see what it was like when the home was hosting a Halloween party, and what it is like to walk with friends and have several excited small ones dashing about. This year was hard for us in some ways, because it would have been our son’s first Halloween, and there was even a child who shared his name. But overall, I enjoyed the experience.

So fast forward a few more years, and I wanted to be the one in the house, and get to see my current neighborhood on the one day when everyone is outside and friendly.

I mentioned earlier that a friend had asked how my costume opinions figure in to how I feel about Halloween. So to wrap up this post, I’ll let you in on that, too.

Basically, there aren’t many occasions when one can wear costumes. Masquerade balls aren’t common, costume parties aren’t super common, and reenactment events are great, but they aren’t at home. So on one hand, I’m all for using it as the one day a year it’s ok to wear nearly anything. On the other hand, there is still a part of me that feels that the costumes ought to be scary (not that I do this…). And another part of me feels that if I wear my historical clothing (which is really more clothing  than costume in how it’s made and worn), I feel like people don’t understand. They expect a trope (witch, ghost, zombie), or a marketed character (Elsa, paw patrol characters, Superman…). They don’t expect “I’m representing what a lady of my age and approximate economic standing would have worn in…”. So I’m really of two minds. But I’m starting to enjoy Halloween simply as a carnival holiday, separated by years and many shifts in tradition from its origins as a pagan take on a Christian holiday.