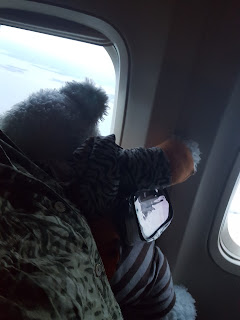 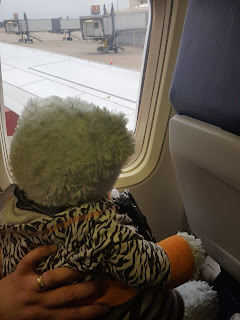 Guess who just took his first airplane flight?!? [and probably his last… more on that later].

We recently took a trip to Boston, and this was the first time I’d flown with Pookie. Previously, all trips we’ve taken with him have been some form of road trip.

The first exciting moment was when we got to the security checkpoint at the departure airport. I had Pookie in my carry on, so he’d be with me, plus I wouldn’t quite trust the baggage handlers to not lose him or something… This was an airport in a smaller city, and despite Pookie’s X-ray showing the sand weights inside of him as just “dense”, they swabbed him down, he came up clean, and the young man who was the agent swabbing him down was very receptive to my explanation of “please be careful, he’s a bereavement bear who is weighted to weigh the same as my son who died…” to which his response was “that is such a good idea!” We cleared security with no issues and went on our way.

Pookie liked being up high. I love being up high. We had a reasonable flight, layover, and flight, though a little bumpy because the weather was gusty.

I’ve already posted about Pookie’s adventures in Boston. I’ll skip over that, and tell you about the day we left Boston.

After our visit in Boston was over, I was ready to go home. I’d over-done it a bit, had a sore foot, and was having an off day. Then a character in my book had a miscarriage, and then a friend did too, so I was hearing about that all day… all that to say, I wasn’t exactly in a great place starting the whole travel home. I’d already been weepy on and off, and was generally really ready to just get back to the comfort of my own home.

When in the airport in Boston, we’d successfully checked our bags despite having to rearrange some weight, and had plenty of time to spare. The security line was completely empty, so we thought this would go smoothly! I always opt out for personal reasons, and choose to be patted down rather than walk through the x-ray gates. For some reason, I was waiting forever, while my carry on and purse were already long since on the other side (and, incidentally, not within my view, either).

Eventually, a female agent finally came around to pat me down, and asked me where my things were. I pointed out 2 of my bins, and then as I saw the third bin with Pookie – unsurprisingly having been selected to be swabbed down – I saw Calvin’s face, and my heart started to pound. I knew something was wrong and that it would not be as simple as it was on the way there.

As I was getting patted down, hubby and the other agents filled me in that, because Pookie’s insides look dense and funny on x-ray, we couldn’t touch him, and they had literally called the bomb squad. Despite the swab coming up clean. I started to shake and get very upset, as they hemmed and hawed, and wouldn’t let us near the bear (though the female agent was very kind, and made sure that while she finished the pat down, I was facing Pookie the whole time, and she held a box of tissues near me for most of the rest of this story).

When the bomb squad agent came, he asked about the x-ray and about the swab: and despite it being clean, since he had been called and because the x-ray just shows that the sand is dense, and doesn’t show what it is, and since the other agents didn’t believe our (true) story about what a Molly Bear is, he had to check things himself. At this point he told us that he has, in the past, actually cut open teddy bears, to sample the sand and make sure it’s not problematic. This, however, is problematic on another front: this is traumatic for the loss parents, since the bear is a stand-in for their child. It is traumatic to be flagged as a threat, when you are flying with a bear that is supposed to bring you comfort. And it is particularly traumatic when they think your poor little bear is a bomb threat, and start threatening him with knives. Not only that, but the bears are weighted to the tenth of an ounce! Cutting open the bear and taking a sample to test could ruin that, which would be horrible too.

The bomb squad man seemed (a tiny bit) sorry to be putting us through this, though the other agents didn’t seem to be. But at this point he talked down to me, and said that “bad guys” (literally his wording) use teddy bears to smuggle things. And he only said that he had cut open bears, not that he was about to do it to Pookie, but it was pretty strongly implied that he was considering it. Eventually he said that we would have to expect this treatment at any airport we went through (we didn’t, obviously, but we don’t know which airports will have hyper agents and which have more humane agents, so that’s a gamble). And I asked what our options would be – if we don’t want him threatened with surgery. He said an option would be to put the bear in the checked baggage. I didn’t say it in reply – but they scan those too, and open those when I’m not there to defend Pookie! So NO WAY IN H…. would I trust that option! So it seems our only option would be to NEVER FLY AGAIN.

At some point the other agents, including a supervisor, seemed to get tired of watching me try not to hyperventilate, and said loudly in their huddle of agents that “THIS YOUNG LADY IS CLEARLY QUITE DISTRAUGHT, CAN WE FIND A SOLUTION?” After which they muttered for a bit and decided to let us go, but with a strong warning.

As you can imagine, this was absolutely terrifying to go through. And very, very difficult to relive, as I have been typing. Hubby was just as upset as I was, and it took us a very long time to calm down. We both looked reasonably calm by the time we boarded our plane, though we were still quite overwrought by the experience. And as you can imagine, neither of us ever wants to go through airport security with Pookie again. Pookie himself was very patient through it all, and gave marvelous hugs to me and Daddy (hubby) as soon as we were through. But despite the fact that I love planes, we will not be flying again. And if you have a weighted bear, I urge serious caution about traveling with them by plane – at least as long as airport security functions the way it currently does. The sense of relief when we’d finished the layover and second flight and got out of the airport and finally to our own car, on our own terms… it was such a long trip. We were so glad to get home.