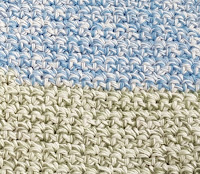 In my previous post about Dolly Parton, I mentioned that I had made a blanket, and that working on it helped me in my grief journey. This post is sharing that blanket!!

It is a cotton blanket, crocheted with just single crochet. The interest is in the variegated yarns and which colors I put where. I knitted a few things while pregnant, and started crocheting this blanket relatively later in the course of things. It was not yet done when we passed Charlie’s due date, and it still wasn’t done when we found out his heart had stopped, when he was born, and when he was buried.

The day we came home from the hospital, we sent the empty car seat home with my parents (I can imagine this must have been rough on them. I’m so grateful they were willing to take it out of my sight, though). Later, that day and over the next few days, I shoved some things in boxes, including a few unfinished projects, yarn, pattern books, and everything I had with them. Shoved them in, not really looking, knowing that going through it right then, or working on it, would hurt hurt hurt so much.

When we moved (about a month after his funeral), we took back the car seat and boxes, since we had a basement to stow them in. And months later, I don’t remember what I was looking for… maybe a crochet hook or knitting needles that had been shoved in the box with everything else, or maybe I was cleaning up odd corners… I rediscovered these projects. And it was sad, and hard, but at this point I could at least look at the projects. I hadn’t knitted, sewed, or crocheted anything in those months.

Looking into the box, the blanket spoke to me, and I felt like I should work on it. And picking that up, and deciding to finish the blanket for Charlie, woke my fingers back up to the soothing rhythm of handwork.

This is the blanket as it appeared before I packed it up, roughly at the spot where I stopped: 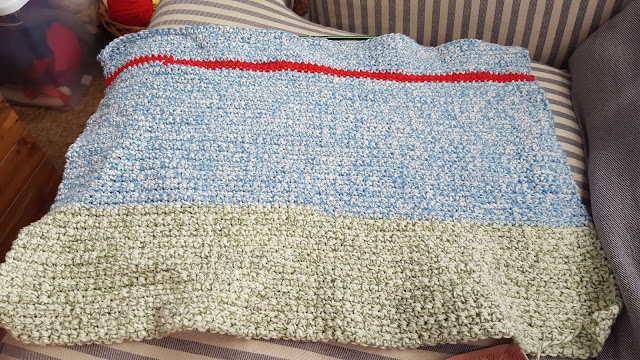 The red stripe was intended to be the midpoint. In fact, starting this blanket again, and finishing it, led me to do many more projects, attempt an Etsy shop, and join a knitting group that donates baby blankets to the local NICU.
This is the blanket, finished except for weaving in the ends: 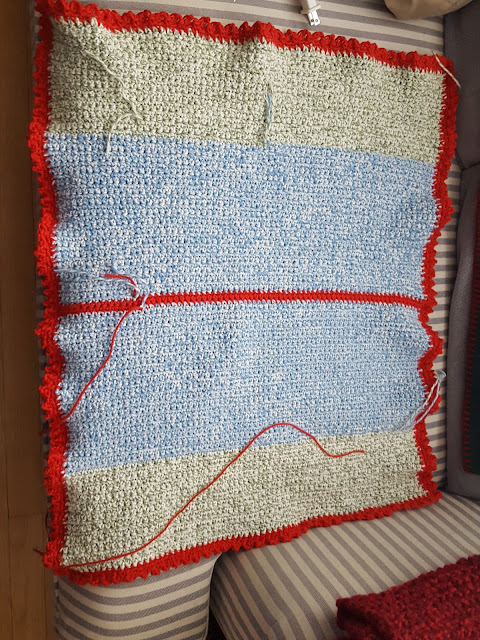 The blanket is now stored in the box of Charlie’s things, which includes a blanket made in his memory by someone in my knitting group, photos, papers, the funeral guest book, things with tigers on them, and many many other things that remind me of Charlie. Much of the clothing we bought and toys we got while I was pregnant I have set aside for possible future kids, as hand-me-downs from their older brother. I may discover that some of them remind me too much of my boy and need to be tucked away, but I’ll cross that bridge when I come to it.

Here is a picture of the final, finished blanket: 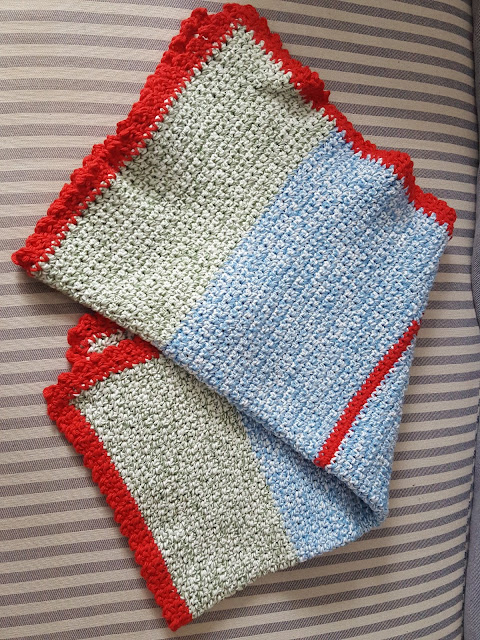 P.S. Always feel free to pass along the link to the spreadsheet (www.tinyurl.com/infantloss) or tell people about this blog, if you think it will help them.