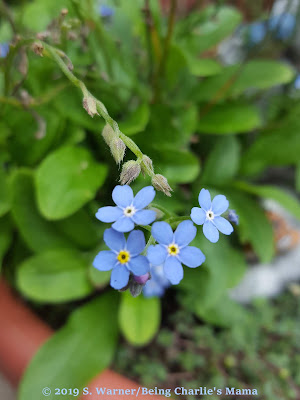 Several times recently, I have been told I am strong. Over the last few years, it’s happened a few times more. Most frequently I have been told this by strangers, who don’t know anything about me, and who have just heard about Charlie – and if I’m not crying, then I’m “strong” and they don’t think they could have done it.

Here’s the thing: They could have done it.

I had two choices: live with it somehow, or don’t live.

People don’t seem to realize that what they’re proposing as an alternate option is suicide, and get really uncomfortable if I point that out. Suicide was never an option for me, but I know people who have been suicidal or who at least wish they were dead – so they could be with their child. I get it. That’s just not how I think of it (for me, personally). I don’t wish I were dead, I wish Charlie were alive.

So, since suicide wasn’t an option for me, I lived with it. With my new, terrible, sucky reality. Living with it does not make me strong. I see myself as weaker than before, actually. But let’s take a sec to define what strong means, because that’s actually the crux of this matter. What do people mean when they say “you’re so strong”?

a) that I can deadlift 150 lbs?
b) that I don’t show emotion in public?
c) that I DO choose to talk about hard topics in public?
hint: it’s not a.

B and C are usually not used by the same person, because they have contradictory meanings. And that’s where I run into issues. When strangers use the word “strong” on me, I have no idea what meaning they are using it as, and since our culture usually goes with B, it’s pretty certain that’s what the stranger means. But is that really strength?

One loss mom talks about strength here, and she seems to view “strength” as a mask you put on – so more like B. In fact, that definition seems to be pretty culturally prevalent, actually.

But admitting that something is hard – and being open about it – and being emotional and vulnerable in public – is actually more work, and so some people choose to understand “strong” to mean option C.

Unfortunately, option B and option C are completely diametrically opposed, and having ONE word mean TWO OPPOSITE THINGS is really, really problematic. So if someone says I’m being strong, I have no idea if they mean I’m repressing my emotion to appear unmoved in public, or if they mean I’m being “bravely open about it”. As you might guess, I really don’t find the first option to be a great or healthy idea. (I am not talking about whether or not you choose to share about your loss. That’s a different topic entirely. I’m talking about how people respond once you do decide to share.)

A few paragraphs ago I mentioned that I feel like I’m weaker than before. Here’s why I say this: In a world where I had one choice (in my mind), which was to live with what had happened – somehow – because the alternate was to devastate my husband further (and because I want to be with him, and wish Charlie were here, not that I were dead with Charlie…), in this world where I had one choice, I chose it. I lived. My reality sucks, sometimes, though. Before Charlie died, minor things going wrong didn’t upset me as often, or to the level, that they upset me now. Before Charlie died, I wasn’t overwhelmed as often. Before Charlie died, I could sometimes comfort or help other people without becoming upset myself. And because one of the prevalent views of strength in our country is to not need help – and being upset usually involves needing help, or comfort, or some sort of assistance – it did not and does not feel like strength. It feels like weakness.

But this is not the side of me that most people see.

Most people see me in “public” because they are the “public”. I often reserve crying and shows of emotion for at home. In fact, our culture often expects men to “be strong” for their wife – which means that grieving men are expected to not show emotion when their wife shows emotion – which is not healthy for the grieving man, either.

Repressing emotion isn’t healthy for any of us, but it can feel shameful, embarrassing, or weak to cry or show sadness or other related feelings (depression, anxiety, being overwhelmed, PTSD) in public. So, many grieving parents squash or hide it, and even if they choose to talk openly and passionately about their loss and even if they are activists for change in the world of pregnancy and infant loss, it often comes with the parent quashing the feelings that would be considered “weak emotion” when in public.

So if you ever want to say I’m strong, know that I’m struggling with how our culture usually defines the word, regardless of how you mean it. Please consider being more specific about what you say (“you are brave to speak out about your child” or “I feel like I would cry all the time. I bet it’s hard.”). Each loss parent has different phrases or topics that might be difficult, so think about what you say – but don’t let that stop you from talking to us. It’s hard to reach out when you are grieving, and it can be isolating. If I don’t say yes right away, don’t force me, just be patient and ask again another time. And if you aren’t sure about whether something you say would be a phrasing that might bother someone, explain what you are trying to mean, and ask them how they would like you to say it. I know I truly appreciate the people to take a minute to try to understand my worldview, and language is an important aspect of it.

Love to you and all of yours,